WingSwap is the premier general aviation online marketplace, intended to make listing and find aircraft or parts for sale, as easy as possible for both mobile and desktop experiences. 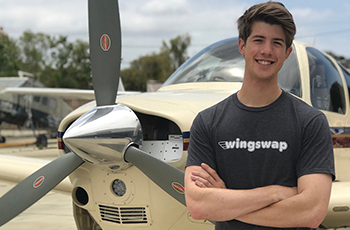 WingSwap was started and is run by Jesse McClintock, a private pilot from Camarillo, CA with a recent degree in finance from the University of Cincinnati. As a child, Jesse grew up loving aviation, knew he wanted his pilots license, and was able to achieve that dream out of Hamilton County Airport (KHAO) north of Cincinnati, OH. The same week he graduated from college. Since then, Jesse has become an avid pilot both in full scale aircraft, and remote control gliders, competing around the country in F3K discus launch glider contest.

WingSwap was founded out of frustration with the status quo. After helping friends list their aircraft for sale at the local airport, Jesse noticed the process of listing airplanes for sale online was cumbersome, took too long and was hard to navigate, not to mention expensive. Even worse than that, in today’s mobile era, fewer people are using computers, and more people are using their cell phones and tablets, yet WingSwap is the only platform that is mobile friendly. After launching in May of 2018, WingSwap has already made waves in the online aviation industry, being “featured in FLYING magazine”, as well as amassing a substantial social media following. The largest of any general aviation market.

It’s through that very online following that WingSwap was able to make a presence in the industry straight away. Paired with a mobile friendly interface, easy to navigate website, and simple process of registering and posting a listing, we are the easiest to use aviation marketplace on the planet.